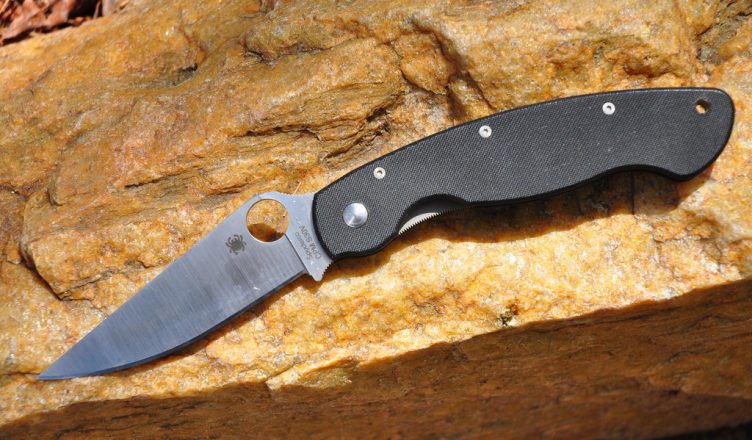 Spyderco Military was one of the first EDC folders I heard about when the knife-crazed paranoia began. I remember myself opening the website, looking at the price and finally buying some Kershaw in the nearby Wal-Mart. The story was always the same: little money and no appropriate knife experience. Even now, I sometimes look at this beast and think – why in the name of God Almighty you are so damn good? I mean seriously – this here Spyderco is one of the ugliest. Still, many people find it extremely useful and awesome. Stick around and find out why this huge EDC blade is so popular and, well, really good.

The knife comes in a standard black and red box with the golden spider logo on it. It has a lifetime warranty and the MSRP of around $260. That is if you want a plain batch production knife, we are discussing today. But don’t forget about all the sprint-run versions with even more premium steel grades available now and then on the official Spyderco website. As always, try and find a cheaper Military on eBay and Amazon. Been there, done that (own a couple of them dirt cheap). Anyway, Spyderco Military is 5.5 inches closed and still weighs 4.5 ounces. Now, let’s talk about the main landmark of this folder – the blade.

At first thought, the blade on Military is an ordinary Spyderco leaf-shape with the standard ambidextrous opening hole. However things appear to be much more complicated than that. The overall blade length is 4 inches. Compared to the previous Spyderco models– this fact alone puts Military aside from many other pocket knives. Just the thought of having a descent cutting edge on a light folder is phenomenal itself. Anyway, that is yet not everything. The main surprise comes from blade thickness which is 0.145 inches, Carl! I mean, dude, a Spyderco with a thick steel piece and a full flat grind? Back in the days I’d laugh in your face. But no, it’s a fact and that I had to deal with. In a nutshell, this saber (not less) works like crazy. Wood carving, cord cutting and other outdoorsman tasks are a piece of cake for Spyderco Military. You might say – the tip is still weak. Well, it might be, however, not with steel like my favoritepremium CPM S30V.

The steel grape part of the review is usually regular. I speak about the physical properties of this and that. You get the overall picture of how good the steel is, yada, yada. But not now. Why? Well, folks, because this here S30V is no ordinary S30V. Sounds weird. Yes it does. You see, Spyderco has always been doing superb steel hardening. And yes, I hear you, Buck lovers there. I am a fan myself, so just let me speak. Like I said, their heat treatment has always been over the top. The way they manufacture the budget Tenacious can literary turn your expectations upside down. Because Spyderco’s 18Cr13MoV rocks. Same goes with their S30V. Compared to Benchmade Griptilian and other not-so-budget-friendly knives, Military stays sharp about 2 times longer. I may be a bit exaggerating, but you get the idea. The review is not about how bad the Griptilian is. It is about how good the blade on Military cuts.

The sharpening is, like they say, a bad apple that spoils the whole barrel. I am lazy. And that’s why every time I take my Spyderco Military or Manix out there in the wilderness, I know that sharpening will be tiresome. Not that the blade edge will chip, but it will dull. If not in a month, than in half a year. And that is a long time. But I will have to sharpen it. All I want to say is – be ready to practice doing it with a Triange or spend money on someone who can do it for you. This will take quite a time. But such is the sore price for the excellent edge retention.

Another thing worth mentioning is the handle. Man I have a confession to make: I hate full metal liners. I mean seriously – why put these massive chunks of steel inside EDC blades? FRN, aluminum and G10 alone are good materials even for hard use tasks. Spederco Manix 2 Lightweight, for example, was a real breath of fresh air when released in 2015. With the blade geometry and form-factor it was a substantial step from the handle with thick liners. Same goes with the Military. Well, almost the same. What we have is basically one short liner inside the G10 scale, which is part of locking mechanism. The second scale is skeletonized (so much steel drilled out, it is almost frame-like) and serves as support to the pivot screw. The liners occupy very small space (one-third handle length) compared to most knives we know. The designers obviously tried a lightweight approach to this EDC blade with liner lock as the onlylimitation. What can I say, Spyderco, you did it again. Well done.

The handle on Spyderco Military may look scary. It is no gentleman’s knife. It is big and clumsy, but it feels perfect. Hammer grip, pinch grip, reverse grip or Filipino – you name it. Everything works with Spyderco Military. Want some precise wood processing? Use a choil. Some hard cutting task? Just take the knife and get this over with already. With or without gloves, your hands will thank you at the end of a long trip, I guarantee that.

I think you get the idea. The knife works, its perfect, no drawbacks, etc, etc. Ought to warn you – this is no final paragraph and we are going to walk through the last three points of Spyderco Military review: the lock, the clip and the deployment.

Surprisingly the belt clip on Spyderco Military is tip down right side only. Not the best weapon of choice for southpaws indeed. Plus I am not the fan of tip down carry style. But all these facts put aside, I can assure you – this clip is tight and comfy. Didn’t have any troubles clipping it to the pocket or taking it from there. The belt clip is not the highest mark of Spyderco Military, but it serves its purposes and isn’t that what we want from a reliable folding knife?

The blade lockup on Military is again A-plus. I’ve been recently doing the review on Rat model 2, where I mentioned the advantages of a liner lock. Long story short, liner lock is still one of the most simple and functional locks ever. It is easy to use, maintain and fix. I guess with Military the whole point was to make a knife that would best suit outdoor and field environment. And they did it. The open frame knife handle combined with the sturdy lock make Spyderco Military a real workhorse. It is not afraid of dirt, wood shavings and such – a real AK-47 of all the folding blades is, ladies and gentlemen, what we have here.

Deploying blade on Military knife is definitely something you get with any Spyderco folder. Which means there is million ways of opening-closing the blade. With a middle, index finger or thumb – no matter when and where the knife opens easily. I once dropped my Military in mud and the blade action was still smooth as ever. Of course I had to disassemble and clean it later but that’s a different story. In other words the mechanics has long ago become a golden standard for all Spyderco knives, Military including.

As mentioned before, at the end of the working day it’s always hard to tell whether or not Spyderco Military is a cool knife. But, all the aesthetics aside, it goes without saying that this here is a true frontsman of all the folders I’ve ever used. Though put through rough and serious work, Military has never failed me in long journeys and regular commuting routines. It is a true helper practically everywhere. In other words, try and understand this knife. I know it’s hard and all. But really, give this knife a chance and it won’t disappoint you. As usual, good luck and stay sharp.

The Best Swiss Army Knife for The Money

Ryan Fletcher - The Best Swiss Army Knife for The Money

Victorinox deluxe tinker has been with me since 2002. All the tools suit well with my daily activities, especially the…

James Davis - The Best Swiss Army Knife for The Money

Thank you for the info

Tim Bass - The Best Swiss Army Knife for The Money

I have owned a victorinox deluxe tinker for 14 years. I bought it because the pliers were such a nice…

Chris R - The Best Swiss Army Knife for The Money

Victorinox Deluxe Tinker the best urban edc Victorinox in my opinion. I have a champ and huntsman in my bug…

Ivan Aritza - The Best Swiss Army Knife for The Money

Great review and to the point. I have just ordered one